In January 1981, an old Lion (in both senses of the phrase), Bill Collin, came to Brussels to fulfil a contract for his firm with the European Commission. 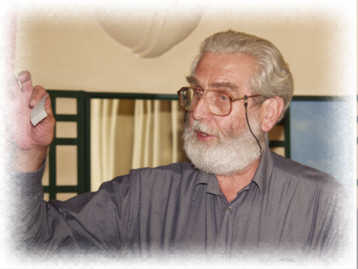 Within a few weeks, he had made contact with the Lions Club of Val Duchesse and was regularly attending their meetings, eventually transferring his membership to them from the Lions Club of Keynsham, Bristol, UK. However, the style of Lionism within Belgium was different from the UK where there is a high emphasis on service work and on fund raising to fulfil these activities. Bill recognized that the expatriate community in Brussels was a potentially rich source for fund raising and that this was not being tapped by the Belgian Lions Clubs. Secondly, he noticed that few members of the expatriate community were members of the local Lions Clubs. On an earlier assignment in Teheran, Bill had founded a Lions Club (The Lions Club of Farah Park, Teheran) with a predominantly expatriate membership and holding its meeting in English. This earlier initiative had been welcomed by the Lions Clubs Organisation in Iran. (Note! When the Ayatollah took power from the Shah, 600 Lions Clubs in Iran were disbanded. Perhaps it was because of the striking resemblance between our founder Bill and the Ayatollah himself)

However, it was not until late 1982 when Bill met Past District Governor, Gustave de Vos of the Lions Club of Bruxelles Erasmus, that a suitable opportunity arose to propose the formation of an English-speaking Lions Club in Brussels to the District Cabinet of Lions in Belgium.

P.D.G. Gustave championed the idea at Cabinet and early in 1983 approval was given to the formation with the Lions Club of Erasmus and Lions Club of Val Duchesse acting as sponsor clubs. During 1983, regular meetings were held at the Tennis Club of La Rasante as the membership built up slowly. It was not until November 1983 when the Club ran its first Swimarathon, raising 1 million BEF that the membership rose to the twenty required for formation.

The help and encouragement given, during the formation period, by P.D.G. Gustave, Lion Lucien Douriet (of L.C. Val Duchesse), and the then Deputy District Governor, Andre Herrant, of L.C. Bruxelles Nations, should be recorded.

The Club was formed and the members inducted at a meeting at La Rasante in Brussels on 29 February 1984. The meeting was conducted by D.D.G. Andre Herrant with a strong attendance from both the sponsor clubs.

During 1984, the members undertook a number of activities and allocated funds to various charities including a trailer and radio to the Red Cross, and the funding of a book on Drug Awareness aimed at the Youth of Belgium.

The Club was presented with its Charter on Sunday, 21 October 1984, at a luncheon at the Sheraton. The presentation was made by District Governor, Joseph Deleersnyder, Lions Club of Tielt. There were over 300 Lions and their wives present, including the then International President Lion, Bert Mason and his wife Beryl. These members were from 187 clubs with 11 clubs from outside Belgium.

Amongst the Charter Members of the Club, there were no fewer than 10 nationalities including 5 Belgian nationals. This demonstrated an initial success in one of the objectives in forming the Club, i.e. to recruit members from as wide a spectrum of the various nationalities in Brussels as possible and, in so doing, provide a bridge between these communities and the local Belgian Lions Members.

The Swimarathons that the Club has run over the first four years have shown that the expatriate community is indeed a rich source of funds, which can be raised for charitable purposes. This was amplified in 1984 when L.C. Brussels Heraldic acted as the first host, outside the UK, to the BBC’s ‘Children in Need’ appeal. This has been repeated each subsequent year.

The above is a short account of the events leading to the formation of the Lions Club of Brussels Heraldic. It is important that in future members remember the original objectives of the Club:

It should be noted that there was, and is, an agreement with the District Cabinet in Belgium that whilst the working language of the Lions Club of Brussels Heraldic is English, communication with other clubs and officials within Belgium should be in French and Dutch, and that any visiting Lion members should be invited to speak to the club in whatever language was appropriate to them.

Finally, a coincidence that illustrates how big, and yet how small, is the world of Lionism. Lion Bill handed over the presidency of the Club to our departed friend Ivan Lovibond at the Christmas Dinner meeting in December 1984 – he was returning to the UK at the end of his assignment. Visiting the club that night was Carlos Hernandez from the Vienna Host Lions Club, Virginia, USA. He was able to bring news and greetings from Past District Governor, Jim Shumaker, a member of Vienna Host L.C., who had become President of the Lions Club of Farah Park, Teheran, when Lion Bill had returned to the UK from Iran.

If you would like to find out more about us, send an email to info@lionsheraldic.net